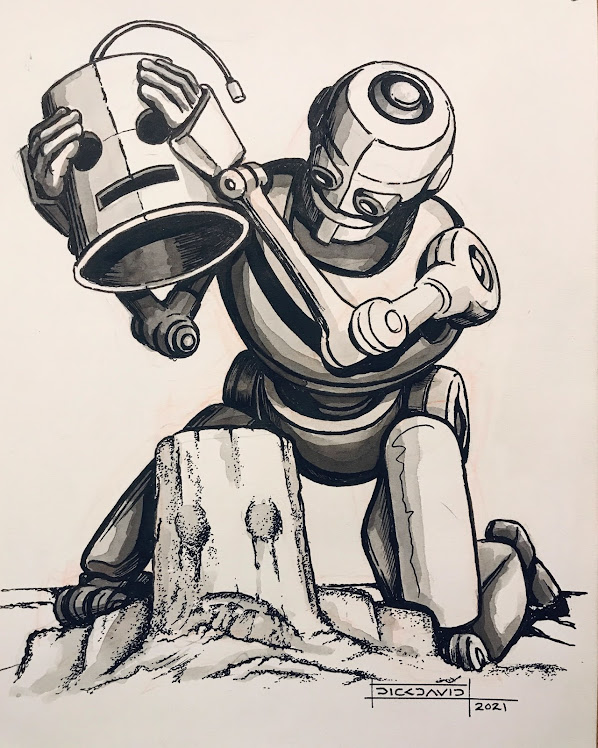 Like some, the first time I heard it was from the 2014 movie, titled the same: Ex Machina — an interesting film, but didn't make my favorites list. The second time I heard the phrase was reading the book I, Robot by Isaac Asimov. I believe the character, Susan Calvin, mentioned it as a pun.

Fascinated by the phrase, I wanted to get the true meaning. The translation from the internet is 'god from the machine' —which seems pretty bitchin'. It goes on to state that it "is a plot device whereby a seemingly unsolvable problem in a story is suddenly and abruptly resolved by an unexpected and unlikely occurrence. Its function can be to resolve an otherwise irresolvable plot situation, to surprise the audience, to bring the tale to a happy ending, or act as a comedic device."

Wiki goes on to say: "The term was coined from the conventions of ancient Greek theater, where actors who were playing gods were brought onto stage using a machine. The machine could be either a crane used to lower actors from above or a riser which brought them up through a trapdoor. Aeschylus introduced the idea, and it was used often to resolve the conflict and conclude the drama. The device is associated mostly with Greek tragedy, although it also appeared in comedies."

I like the idea of an abrupt and unlikely resolution to an unsolvable problem. Sometimes, when I draw robots, I try to think of them in situations where they resolve conflict or find opportunity to create solutions. Ultimately, my goal is to give a slight nod to the idea of deus ex machina, and build a better narrative in my work.

In social media, I'm going to try and hashtag my robot sketches with this phrase. Right now, some fashionable motorcycle clothing company—who uses the phrase as their name—is using it, which I feel is way out of context.

My goal will be to take it back for the machines.