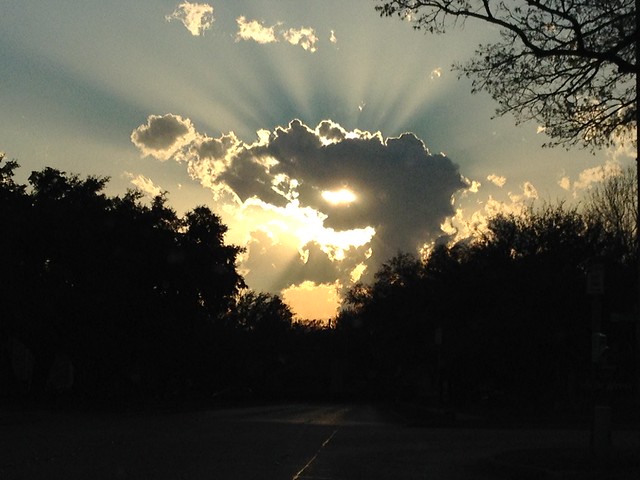 I've been collecting favorite quotes that I've read from different books and around the inter webs, and I thought that I would share them here. This collection is open-ended, where I will keep adding more as I get them.

Since I found some of these online, I cannot say that these are 100 percent accurate or if these people actually said them. Take them for what they're worth, good words of wisdom to relate to and live by.

"Every time I see an adult on a bicycle, I no longer despair for the future of the human race."
- H.G. Wells

"...Though much is taken, much abides; and though
We are not now that strength which in old days
Moved earth and heaven; that which we are, we are;
One equal temper of heroic hearts,
Made weak by time and fate, but strong in will
To strive, to seek, to find, and not to yield."
- Alfred Lord Tennyson

"It is by riding a bicycle that you learn the contours of a country best, since you have to sweat up the hills and coast down them. Thus you remember them as they actually are, while in a motor car only a high hill impresses you, and you have no such accurate remembrance of country you have driven through as you gain by riding a bicycle."
- Ernest Hemingway

"Nothing compares to the simple pleasure of a bike ride."
- John F. Kennedy

"The computer is like a bicycle for our minds."
- Steve Jobs

"… I believe that as long as you operate your vehicle compassionately and responsibly, it doesn't matter what kind of vehicle it is."
- Bike Snob NYC

"Everyone in their life has his own particular way of expressing life's purpose—the lawyer his eloquence, the painter his palette, and the man of letters his pen from which quick words of his story flow. I have my bicycle."
- Gino Bartali

"We are the music makers, and we are the dreamers of dreams."
- 'Ode' by Arthur O'Shaughnessyi. Quoted from Gene Wilder's Willy Wonka

“Creativity is allowing yourself to make mistakes. Art is knowing which ones to keep.”
- Scott Adams

“Who climbs with toil, wheresoever,
Shall find wings waiting there.”
- Henry Charles Beeching, 'Going Down Hill on a Bicycle: A Boy's Song'

“Life is like riding a bicycle. To keep your balance, you must keep moving."
- Albert Einstein

"I would prefer even to fail with honor than win by cheating."
- Sophocles

"A universal truth of bicycling is this - pain is inevitable, suffering is optional."
- Robert Penn

"Everything about riding a bicycle compels you towards beauty."
- Bike Snob NYC

"If you never did you should. These things are fun and fun is good."
- Dr. Seuss

"We must learn to live together as brothers or perish together as fools."
- Martin Luther King Jr.

"My country is the world, and my religion is to do good."
- Thomas Paine
Posted by dickdavid